August 2019 Artifact of the Month 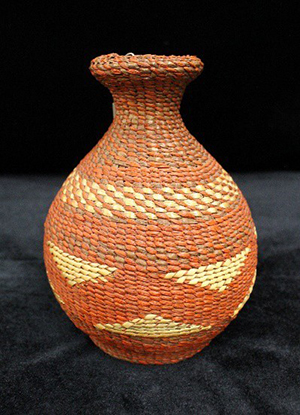 The Sheldon Jackson Museum’s August Artifact of the Month is a twined cedar bark covered bottle (SJ-I-C-9). Still vibrantly colored, the basketry-covered bottle is in excellent condition and was likely made in the early 20th century. This colorful example of Tsimshian basketry was generously donated to the museum by Gladys Whitmore of Sitka on Dec. 10th, 1976.

The basket’s glassware base, a late 19th century Chinese vessel for sake, is covered with twined cedar bark dyed a rich, bright orange color. Three bands of straw-colored designs flank the basketry walls - the topmost band in the upper third of the bottle consists of four consecutively woven linear rows. In the lower third there are two bands of triangular shapes mirroring each other. Though hidden from view, the bottom base has a circular design in dark purple dyed cedar bark with lines radiating off it from its center. In varying degrees, undyed cedar is interspersed throughout.

According to the museum’s accession ledger and a handwritten note on file from then curator Esther Billman, the August Artifact of the Month was made by “a lady known as Aunt Maude” and was owned by Ms. Whitmore for many years. Ms. Whitmore had been given the basketry- covered bottle by its original collector, Edna Rue. Ms. Rue had purchased the piece in Ketchikan “from a Native woman from Metlakatla” sometime between 1930 and 1940. The museum has no records on file about Edna Rue, nor about “Aunt Maude,” however, based upon the time period in which the basket was purchased, one can make a well-educated guess as to who these women were.

Based upon an obituary published in The Seattle Times on August 13, 2002, Edna Rue, the originally collector of the bottle, was likely Edna Baker Rue. Ms. Rue was born November 10th, 1904 and passed away on August 10th in 2002 in Seattle, Washington. At the time of her passing, she was a resident at Providence Mount St. Vincent Nursing Home. Earlier in life, she had obtained a Master’s degree in Education from Stanford University and done further study at Columbia University in New York. She then became a dedicated elementary school teacher who worked in Ketchikan, Alaska and Seattle, Washington. She married Alec Rue in 1940 and the two travelled the world together extensively with great “interest in learning about other cultures and sharing with students and friends.”

The museum records pertaining to the August Artifact of the Month contain no biographical information identifying the artist “Aunt Maude” but she was most likely Maud Helin, a prominent Tsimshian woman. In the book Robes of Power: Totem Poles on Cloth by Doreen Jensen and Polly Sargent, Carole Helin, describes sewing an Eagle blanket for her husband Roy Vickers, and references his mother (her mother-in-law), Maud Helin: “My husband’s [Roy Vickers’] mother, Maud Helin, a chief of the Gitgeese tribe of the Tsimshian Nation, was very involved with all her children. She talked about their culture and history and where they stood in the world. She never stopped telling them how important they were in society…”

The Sheldon Jackson Museum has forty Tsimshian baskets in its collection, but the August Artifact of the Month is one of only three Tsimshian basketry covered bottles in the museum’s holdings. The other two examples were both donated to Sheldon Jackson Museum by former curator Peter Corey in 2016 via bequest. The August Artifact of the Month and other Tsimshian artifacts may be seen at the museum during operating hours – every day between 9am and 4:30pm, except some holidays. General admission is $7, $6 for seniors, and free for those 18 and under or members of either the Friends of the Sheldon Jackson Museum or Friends of the Alaska State Museum.