December 2019 Artifact of the Month 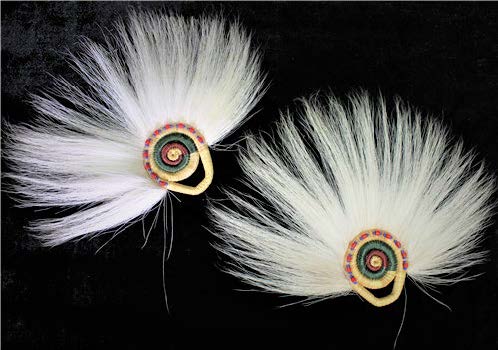 The Sheldon Jackson Museum December Artifact of the Month is a pair of Yup’ik dance fans (SJ-II-S-146). According to files, these dance fans along with a dance headband made with ribbon, glass beads, wolf and beaver fur (SJ-II-S-149) were purchased at “Winter Festival at Bethel” and received by Alice Postell in February 1973. The set of dance fans was purchased for just $12.

Dance fans known as tegumiat, translated literally from the Yup’ik language, as “things held in the hand”, are used to accentuate the fluid movements of a dancer’s arms and have traditionally danced by both men and women during masked winter dances and ceremonies in the qasgiq or men’s traditional community house such as Itruka’aryaraq or Agauyyaraq, the Inviting In Feast, and the fall festival Qaariitaaq. Like regular masks, they are used to tell stories while dancing and singing and to express thanks or supplication. During the dances, men kneel facing the audience while women stand behind them, bending at the knees, and moving their arms in a motion to tell the story that goes with the song. Women historically often cast their eyes respectfully downward during the performance and allow the finger mask’s “eye” to “see for them” while they danced. While dancing, it is believed that the performer is visible to the spirit world.

Yup’ik dance fans vary greatly in style but there are many similarities across the fans. Typically, dance fans had feathers, wisps of caribou hair, and were painted with white, red, black, and blue pigments. Some finger fans had geometric designs while others had carved faces depicting seals, walrus, birds, salmon or creatures with crooked or toothy mouths like those on larger masks. Finger fans often represented opposites of each other such as a smiling face on one and a frowning face on the other. Different sides of the same dance fan could also display different faces.

Styles of dance fans used by men and women have varied slightly over time. In contemporary dance, women use circular dance fans made of coiled grass, also ornamented with caribou hair and feathers, similar to the December Artifact of the Month pair of dance fans. Today, Yup’ik women most often use fans with woven grass handles decorated with caribou hair. Traditionally, they would have danced small wooden dance fans carved for them by their male relatives with iconographic renderings of bear, fox, mink, and wolf. The designs used on the fans were ones passed down between families. Men’s fans have traditionally involved simple willow root hoops or coiled grass hoops with feathers, usually snowy owl or swan, inserted into them.

As a result of great suppression of masked dancing traditions in the early 1900s by missionaries, carved dance fans are rare today. The Sheldon Jackson Museum is fortunate to have a collection of twenty-four Yup’ik dance fans, more than half of which done in the older style and carved from wood.

The Sheldon Jackson Museum’s December Artifact of the Month and many Yup’ik masks and dance fans may be seen at the museum during hours of operation – Tuesday through Saturday 10am until 4:00pm. General admission is $6, $5 for seniors, and free for those 18 and under or members of either the Friends of the Sheldon Jackson Museum or Friends of the Alaska State Museum.