February 2020 Artifact of the Month 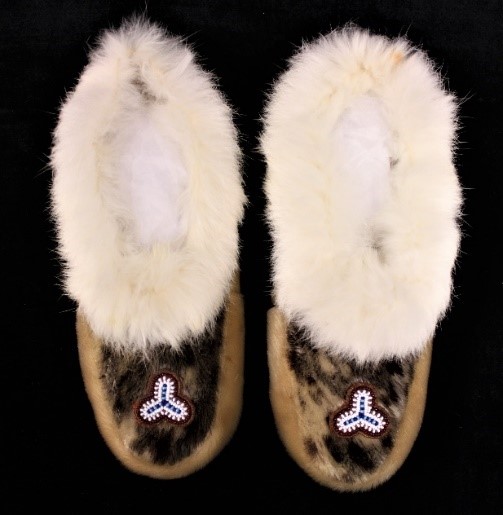 The Sheldon Jackson Museum February Artifact of the Month is a pair of moccasins (SJ-II-X-164). The moccasins were donated to the museum in 1992 by Helen Waters who had received them originally from her aunt and uncle, a Mr. and Mrs. Franklin Adams.

There is little information on how Mr. Franklin Adams and his wife, Helen, came to acquire the moccasins but the donor included some information about their connection to Sitka with her letter to then-curator Peter Corey. According to the letter, Mr. and Mrs. Adams lived in Sitka between 1904 and 1915 while Franklin was working for the U.S. Government doing surveying and exploring work. It was at some point during this time that they acquired these moccasins, though the maker of the footwear and source is unknown.

The beautiful moccasins, while collected in Sitka, are Inupiaq in style and not Tlingit, so were probably made elsewhere and purchased by the Adams family in Sitka.  They notably have sealskin sides, light tan in color and soft, white rabbit fur on top around the collar openings.  The top vamps of the moccasins are also seal skin but spotted with light and dark brown. The bottom outside sole is a dark brown leather and the inside of the slippers is lined with what appears to be sheared sheep skin. Tiny white, burgundy, and blue seed beads are sewn to a red felt upside down piece sewn to the tops. From the lack of wear on the inside and bottom soles of the moccasins, they have never been worn and are in pristine condition.

The Sheldon Jackson Museum’s February Artifact of the Month will be on exhibit until February 29th. The moccasins and many other examples of footwear in the permanent collection may be seen at the museum during hours of operation – Tuesday through Saturday 10am until 4:00pm.   General admission is $6, $5 for seniors, and free for those 18 and under or members of either the Friends of the Sheldon Jackson Museum or Friends of the Alaska State Museum.