January 2020 Artifact of the Month 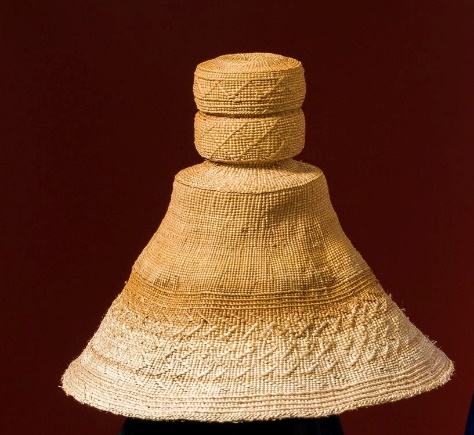 The Sheldon Jackson Museum January Artifact of the Month is a spruce root hat (SJ-2019-3-1). The Sheldon Jackson Museum purchased the hat directly from the Haida artist who made it, Delores Churchill, using a Rasmuson Art Acquisition Grant Fund award of $15,000. The fund, administered by Museums Alaska, makes possible the purchase of contemporary artwork from living, working Alaskan artists.

The spruce root hat made by master Haida weaver Delores Churchill was woven to illustrate the "Gitansk" story of the spider and snail. Delores was told this traditional Haida story by her mother, Selena Peratrovich, when she was young and because no one had told or captured the story visually in any art form to her knowledge, she decided to "weave it into the hat." The following account of the story was told by Delores in a phone interview:

"In the story, a spider had woven a web and the slug was looking up at it. It was morning and the morning dew was on the spider web so when the sun came up, it shot up rainbows, making different colors. So when the slug was looking at it, he said, "I can do that too, make something beautiful." So he made a chevron design with his slime and when the sun shone on it, it shot up rainbows, so the Haida lesson from the story is you will always find beauty in everything, so look for it."

The finely woven hat shows the "snail trail" or "snail track" design in the self-weave and skip-stitch design in the lower portion and in the potlatch ring area of the hat, includes both the "snail's trail" and "spider web" designChurchill is a well-known, internationally recognized, master Haida artist who has received with accolades from the National Endowment for the Arts, the Alaska State Council on the Arts, the Rasmuson Foundation, the First People's Fund, Sealaska Heritage Foundation, the National Basketry Association, the Governor of Alaska, the Canadian Museum of Civilization, and many other organizations.

A weaver of baskets, hats, robes, and other regalia, Churchill was born in Masset, British Columbia in Haida Gwaii in 1929. She first began weaving at age 42 after she realized that "cultural knowledge will be lost if the next generation does not learn." Her first weaving class was held at Ketchikan Community College and was taught by her own mother, Selena Peratrovich. Three years after taking the class, she retired to weave full time and ever since, has intensely focused on exploring and studying the arts of the Haida, Tlingit and Tsimshian people and augmenting her own cultural knowledge. In addition to studying under her mother, she has studied with Unangan basket weaver Agnes Thompson, Athabascan birch bark basket maker Belle Deacon, Chilkat weaver Jennie Thlunaut, Tsimshian basket weaver Flora Mather, and Tlingit basket weavers Esther Littlefield and Annie Jacobs.

The Sheldon Jackson Museum’s January Artifact of the Month and many spruce root baskets in the permanent collection may be seen at the museum during hours of operation – Tuesday through Saturday 10am until 4:00pm. General admission is $6, $5 for seniors, and free for those 18 and under or members of either the Friends of the Sheldon Jackson Museum or Friends of the Alaska State Museum.