March 2020 Artifact of the Month 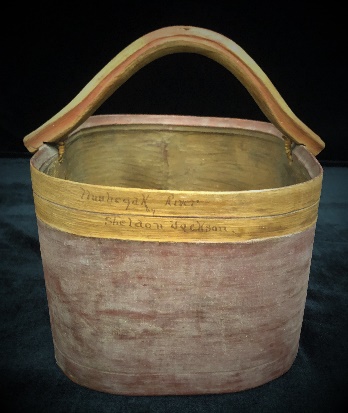 The Sheldon Jackson Museum March Artifact of the Month is a Yup’ik square-shaped bentwood bucket (SJ-II-A-37). The bucket was collected by Sheldon Jackson and has an inscription painted on the top side edge in his hand reading: “Nushegak River Sheldon Jackson.” The bucket is the only one in the museum’s collection with a woman’s face carved in the bottom interior and just one of four bentwood Yup’ik containers from the Nushagak region southwestern Alaska.

Mixed-grain wood was the most desirable material for making sides of bentwood buckets and bowls because it had qualities of both soft and long-grain woods. The softer grains resulted in greater pliability and easier working of the wood during bending while the shorter grain allowed for strength. The Yup’ik term for this wood was avuaralget, literally translating to “ones that have something else in them.” In addition to considering the grain, carvers would look for pieces with a natural curve that they could use to their advantage. Tree stumps were particularly valued for bottoms of bentwood bowls and containers because they were easy to work with and strong.

Once the right piece for a bentwood dish or bucket was found, Yup’ik men set to work and steam the wood in the qasgi, the community and ceremonial house. Pieces cut with adzes and crooked knives were dipped inside very hot water and then heated in a confined space through a process called ulunirluki. Once satisfied with the bend, the men would help each other clamp the site where the wood was to be joined and let it rest in the heat. After enough time had passed, the men would use blood from their noses to paint the areas where the wood was to be joined and re-clamped the pieces again, exposing it to heat to dry. Once dried, the men punched holes through the ends and wove the pieces together with spruce root to prevent any separation. Thinner spruce roots were collected in Yup’ik riverside communities in the late fall or were traded for and used to bind wood together and where the handles attach to the top on each side as is the case along one side of the March Artifact of the Month. As the upper part of a bowl or bucket was drying, carvers shaped the bottom, made to fit perfectly within. To ensure a tight fit, pieces were pressed and snapped into place and thinned as needed with a curved knife. 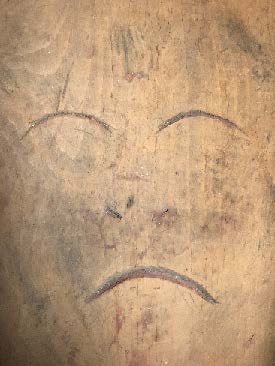 In May 2000, then curator Peter Corey, showed the bucket and many other artifacts, to a group of Yup’ik elders visiting from the Dillingham area for a little over a week. The elders included Marie Meade, Elisa Ishnook, Wassillie Simeon, Mary Ishnook, and Julia Apalayak. When Marie examined the bucket, she commented that she thought it was used for berry picking. She noted that “a woman’s face seems to be painted on the bottom.” Julia was recorded as saying, “This bucket is used for berry picking. They took care of them carefully. They painted them with uiteraq [red ochre]. The inside drawing is a woman because a woman used this for either berry picking or packing water. This bucket was bent to be made. The handle is sewn together with tapengyak [hide rope]. It is tied together with spruce tree root. They used this for thread when they tie wood together even when they make fish traps.”

The Sheldon Jackson Museum’s March Artifact of the Month will be on exhibit until March 31st. The bucket and many other examples of Yup’ik bentwood containers, ladles, and dippers may be seen at the museum during operating hours – Tuesday through Saturday 10am until 4pm Tuesday through Saturday. General admission is $6, $5 for seniors, and free for those 18 and under or members of either the Friends of the Sheldon Jackson Museum or Friends of the Alaska State Museum.