May 2019 Artifact of the Month 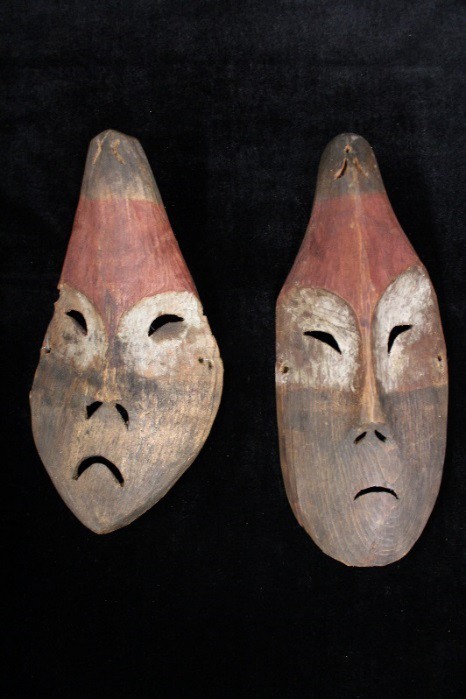 The Sheldon Jackson Museum’s May Artifacts of the Month are a pair of Inupiaq masks (SJ-II-E-2 and SJ-II-E-35). The masks were both collected by Sheldon Jackson from King Island in 1893. At first glance, the masks seem relatively simple, but closer examination shows that they were carved in a complex manner to depict three faces and suggest the representation of two different animals.

There is limited information about the masks on file and neither mask’s record indicates the two are associated with each other. They do not have similar object ID numbers and were previously stored in separate drawers in the museum’s collection storage. Yet, when placed side by side each other, their similarities became apparent.

The May Artifacts of the Month have many aesthetic similarities. The masks are both painted with black, red, and white pigment – the black potentially indicating night, the red, ancestral blood, and the white, the celestial realm or daylight. Both masks are carved from single pieces of wood and have long faces that taper in a rounded form at one end. Though one is wider than the other in the lower third and has a slightly pointed chin, they have nearly identical carved details. Each piece has a hole and two curved lines tapered on one end and rounded at the other – perhaps representative of a whale blowhole. Though there are some small differences in the masks’ design, including a lesser pronouncement of the bridge of the nose in one of the two, based on their similarities, it is highly likely that they were made by the same hand.

Three or four different faces are visible in the mask, depending upon the features focused upon and the way in which the mask is viewed. When the masks are viewed as they are shown in the photograph in this article, they appear as humanoid faces. If one covers the top half of each face from just above the nostrils, there appears a second set of faces comprised of a set of crescent shaped eyes and a downward turned crescent shaped mouth. If the masks are turned “upside down” the humanoid face resembles a seal with crescent shaped eyes in the white area of the mask and a nose with nostrils in the portion of the mask painted black. If one covers the entire mask except for the black area where the “blowhole” or “nostrils” are located, yet another set of faces made up of two crescent shaped eyes and a hole for a mouth is visible.

It is possible that the Artifacts of the Month were danced together in a pair. King Island dancers dressed in masks and special regalia for many ceremonial events including the Walrus Dance, Wolf Dance, Polar Bear Dance, and other performances held in the qargi, or ceremonial house. Many of these dances are still performed; each tied to a traditional story of its origin. Although it is unknown in which dance or ceremony these masks may have been used, it is possible they were intended to ask the spirits for a bountiful harvest of seals in a fall, winter or spring harvest or to thank the seals who had given themselves up to the hunters in the past season. Seals, hunted by King Islanders from kayaks with harpoons and spears and with nets, were of utmost importance and provided for many necessities including food, sinew for sewing, oil for burning for warmth and cooking, hides for clothing including parkas, breeches, mittens, and mukluks, gut for parkas, rawhide for umiaks and kayaks, trade goods, and more.

The Sheldon Jackson Museum has sixty-seven masks from King Island in its permanent collection. The May Artifacts of the Month and many other Inpuiaq masks may be seen at the museum during operating hours – every day between 9am and 4:30pm, except some holidays. General admission is $7, $6 for seniors, and free for those 18 and under or members of either the Friends of the Sheldon Jackson Museum or Friends of the Alaska State Museum.