November 2019 Artifact of the Month 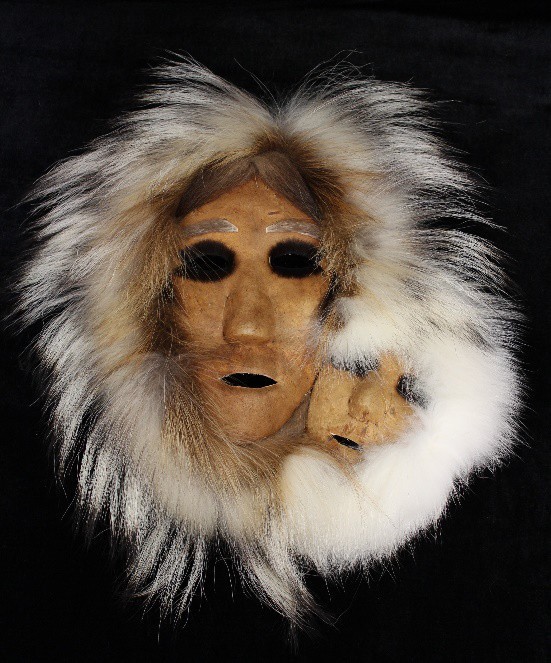 The Sheldon Jackson Museum November Artifact of the Month is a mask from Anaktuvuk Pass (SJ-2019-2-1). The mask, along with another Anaktuvuk Pass mask of a man’s face was generously donated to the museum in 2019 by Henrietta Van Maanen.

Van Maanen, a still-frequent volunteer on the Sheldon Jackson Campus, was a Volunteer in Mission in Sitka since the 1960s. Her work with the church took her to Anaktuvuk Pass in the 1970s and while there, she purchased two masks, including the November Artifact of the Month, from a man at a general store in the village. At the time, Van Maanen thought that she was purchasing them directly from the artist, but upon examination at the museum, the curator noticed each mask has a tag with the name Lela Ahgook in handwritten script attached. It is possible that the seller of the masks was Ms. Ahgook’s husband, Noah Ahgook or another relative of Lela’s, and that Lela herself made the mask. The entire Ahgook family is knowns for their mask making even today.

While the Sheldon Jackson Museum has seven Anaktuvuk Pass masks in its permanent collection, this mask is distinctive from the others in that it is the only mask featuring two faces and the only mask that is identified as plausibly being made by a woman. The mask features two faces and may represent a mother and child. The skin on the faces is of caribou and tan in color. The hair and eyebrows are made of caribou beard fur. The ruff around the woman’s face is light grey with dark tips - wolf fur. The ruff around the child’s face is white wolf fur.

To make a mask in this style, one scrapes membranes from caribou skin to soften it, leaving a short stubble on the other side. Next, wet caribou skin, usually soaked overnight in a dying agent of caribou blood, reddish dye made with alder bark, iron oxide from a river bank, coffee, cocoa or tea. The skin is stretched around a wooden form and nailed on. After one day, the skin is dried, holds its form, and is ready for cutting out of the eye and mouth holes. The fur details are added.

Earlier masks had fur ruffs, eyebrows, eyelashes, and if male, often beards, moustaches, or both that were sewn on with sinew while later ones were sewn with thread or glued on. The ruff, usually made of lynx, fox, grizzly bear or wolf is put on last.

The Sheldon Jackson Museum’s November Artifact of the Month, many other masks may be seen at the museum during hours of operation – Tuesday through Saturday 10am until 4:00pm. General admission is $6, $5 for seniors, and free for those 18 and under or members of either the Friends of the Sheldon Jackson Museum or Friends of the Alaska State Museum.