November 2018 Artifact of the Month 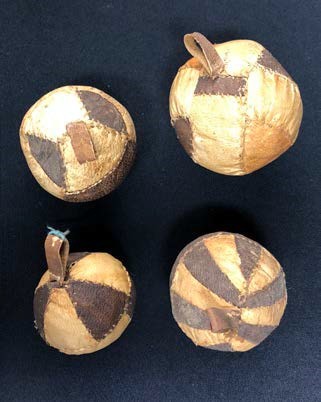 The Sheldon Jackson Museum’s November Artifact of the Month is a group of four seal skin balls collected from Barrow by Reverend Samuel Spriggs (SJ-II-V-96 a-d). The balls may have been used for the traditional Alaska Native high kick game. These small artifacts are relatively plain but are interesting for their ability to highlight the significance of a collector whose artifacts are well-represented in the Sheldon Jackson Museum’s permanent collection and the ongoing importance of winter games.

Reverend Samuel Spriggs was a Presbyterian missionary who collected extensively at Point Barrow between 1899 and 1908. In 1989, his great niece, Ellen Harrington of Blairsville, GA., who had inherited Spriggs’ collection of objects, photographs, and lantern slides, contacted the museum with interest in selling some of them to the Sheldon Jackson Museum. At that time, the museum purchased nearly one hundred pieces from Ms. Harrington. In 1995, she donated additional items, bringing the total number of artifacts from the Spriggs Collection to two hundred. The museum was elated to receive such a gift and have the opportunity to make the earlier purchase because the artifacts were collected at a time that overlapped with the same period in which Sheldon Jackson was collecting.

The Alaskan high kick game is an activity that requires great strength and preparation. To perform the high kick, an individual must sit on the floor and balance on one foot while reaching across his or her torso to the other foot. While leaning back on one’s opposite hand, the player thrusts up the foot being balanced upon straight into the air to kick a suspended ball. Finally, the individual must land on the kicking foot, without losing balance. With each kick, the ball is raised slightly higher in increments. The winner of the game is the person who has maintained balance at the highest height as the other players are eliminated with missed kicks or wobbly landings.

The Sheldon Jackson Museum is home to slightly over a dozen Inupiaq seal skin balls used for games and to sixteen ivory carving games. The November Artifact of the Month will be on exhibit until November 30th. Visitors may see these artifacts and other examples of Alaska Native games and items from the Spriggs Collection at the museum during operating hours - Tuesday through Saturday between 10 am and 4:00pm. General admission is $6, $5 for seniors, and free for those 18 and under or members of either the Friends of the Sheldon Jackson Museum or Friends of the Alaska State Museum.