October 2019 Artifact of the Month 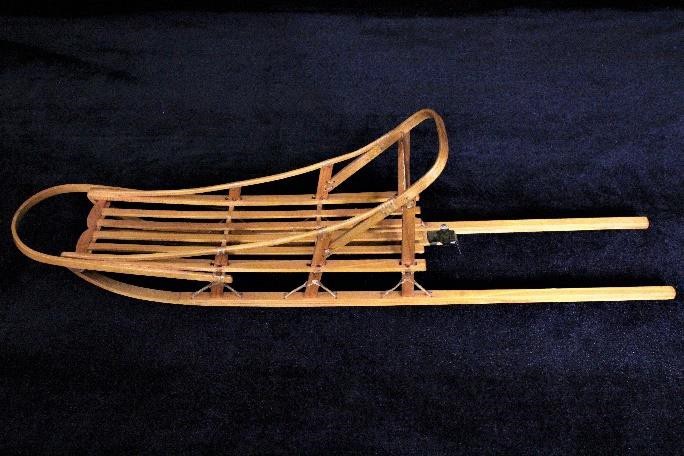 The Sheldon Jackson Museum October Artifact of the Month is a model sled (SJ-IV-D-7). The original maker of the sled is unknown and we have little information about the artifact, but we know that it was purchased for the permanent collection in 1974 by long-time museum volunteer,  Alice  Postell,  from  Ray Scobie who resided at the Forty-Mile Roadhouse in Tetlin near Tok, Alaska, along the historic Taylor Highway.

Alice Postell moved to Sitka in the 1970s, after she separated from her husband, Sam. Soon after arriving, she became a Volunteer in Mission at the Sheldon Jackson Museum, acting as Assistant curator to Esther Billman, and began working with a professor of anthropology at the Sheldon Jackson College. She stayed on at the museum until 1977 and often returned later to the museum to conduct research. In 1990, at age 80, Postell published her book, Where Do the Reindeer Come From?, following her fifteen years of research that chronicled the introduction of reindeer to Alaska by the Presbyterian missionary and museum founder, Sheldon Jackson. She passed away in April of 1998 in Portland Oregon at the age of eighty-eight.

The October Artifact of the Month is Athabascan and a contemporary piece done in an older style with a rounded front and handle and sinew ties. The majority of the nearly two-hundred models in the museum’s collection were collected by Sheldon Jackson and date back to the 19th century. The models include Tlingit miniature totem poles, dance paddles, and canoes; Athabascan fish traps and caches; Unangan (Aleut) kayaks; and Yup’ik and Inupiaq hunting implements, dance and ceremonial scenes, qasgiq and houses, umiaks, kayaks, and sleds. Miniatures were traditionally used to teach children how to do certain activities such as hunting and managing household duties but they were also used for amusement indoors and outdoors and in more contemporary times, made for sale to tourists.

Only three of the sled models in the collection and only one of the full-sized sleds are Athabascan. A possible explanation of the predominance of Yup’ik and Inupiaq sleds and sled models in the collection is the fact that it was not until the mid-1800s that Atahbascan peoples in the interior began using sleds. At that time, neighboring Yup’ik and Inupiaq and fur trappers introduced sleds used by dogs.

The Sheldon Jackson Museum’s October Artifact of the Month, many other models and miniatures, and five full-sized sleds may be seen at the museum during hours of operation – Tuesday through Saturday 10am until 4:00pm. General admission is $6, $5 for seniors, and free for those 18 and under or members of either the Friends of the Sheldon Jackson Museum or Friends of the Alaska State Museum.