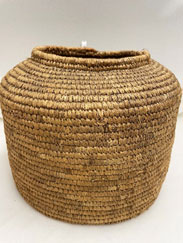 SITKA – The Sheldon Jackson Museum’s July Artifact of the Month is a Yup’ik coiled grass basket (SJ-II-S-53). There is little information on record about the basket. It's documented as coming from the Kuskokwim River area and was likely collected by Sheldon Jackson in the late 19th century. The basket is slightly misshapen, with no embellishment, but it is unique among the coiled baskets in the museum’s collection because it features a piece of hide sewn to the base at its center.

The traditionally Yup’ik cultural area of Alaska includes a little over fifty small villages along the Bering Sea and banks of the lower Yukon and Kuskokwim River and near the edge of the northern reaches of Bristol Bay. Because of their location, Yup’ik peoples remained largely isolated from world trade until the last part of the 19th century, when the Alaska Commercial Company and Moravian missionaries arrived.

Coiled basketry is atypical of basketry made by women in the Yup’ik area of Alaska until the late 19th century. Prior to that time, Yup’ik women made loosely twined grass carrying baskets called issran. According to Molly Lee, coiled basketry or mingqaaq was most likely introduced to the Yup’ik by the Inupiaq peoples of the Bering Strait, who had borrowed the technique from Siberia. The coiled style was likely adopted for selling purposes – coiled basketry was easier and better able to withstand packing and shipping than traditional twined basketry. The coiling of the basket also offered more options for decorative embellishment than twining.

The market for basketry was fueled by Moravian missionaries in the 1890s. The missionaries, aware of interest in Native-made basketry, began purchasing coiled baskets from Yup'ik, exporting them to Pennsylvania, and reselling them to benefit the mission. Baskets ended up in the hands of individual collectors, and a number of them were added to early museum collections, including at the University of Pennsylvania Museum of Archaeology and Anthropology. It is unknown whether Sheldon Jackson purchased the July Artifact of the Month from Moravians or directly from Yup’ik peoples.

The basket will be on exhibit through July 31. The Sheldon Jackson Museum is home to approximately one hundred coiled grass baskets and many other grass and grass-embellished artifacts. You can view them during regular museum hours, Wednesday-Sunday, 9 am-4 pm. General admission is $9 for adults, $8 for seniors, and free for those 18 and under or members of either the Friends of the Sheldon Jackson Museum or Friends of the Alaska State Museum.