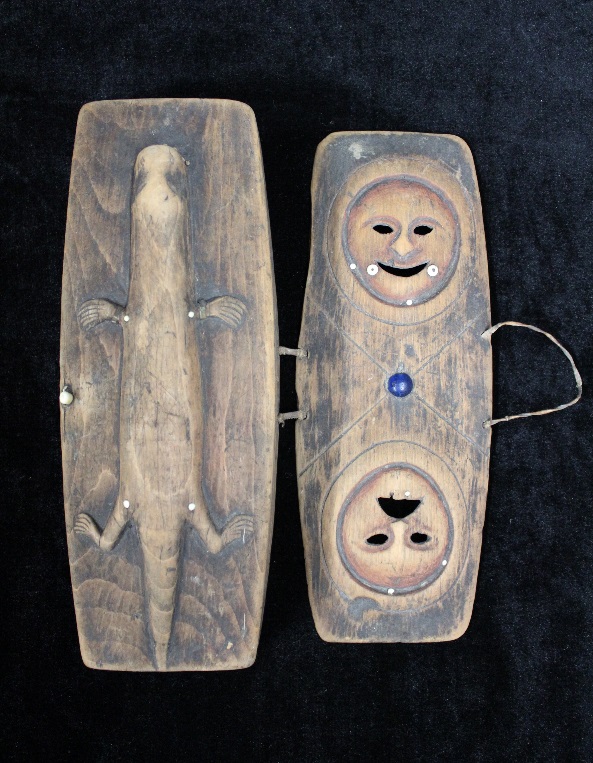 The Sheldon Jackson Museum’s February Artifact of the Month is a Yup’ik wooden box (SJ-II-B-75). The wooden, rectangular box was collected by Sheldon Jackson from Andreafski in 1893. Carved from a single piece of wood, the box is hinged with rawhide and fastened with a loop to a peg on the side. The lid has two faces carved into its surface –one with a large upturned mouth and two white beads aslabrets and a second face with a downward turned mouth. [citation 1] Two small ivory pegs are fitted in the recessed line around the carved faces and a third is placed just below the mouth of the frowning face. At the center of the lid is a large blue bead situated between two diagonally carved lines. The bottom of the box has an animal carved in low relief with a seal-like head, flippers, a long tail, and an open mouth fitted with a set of teeth. A small ivory peg is located at each of the animal’s joints. Containers were made to store a variety of things including thin slate lance points, trinkets, pigments, tobacco, and snuff but according to museum records, the February Artifact of the Month was made to be an "arrow box" to store arrow points.

Tool boxes like the February Artifact of the Month were traditionally made by men for themselves and their wives using bending, pegging, hollowing out, and mortising woodworking techniques. The wood used to craft such boxes was carefully gathered throughout the year and attention was paid to which pieces were most suitable for containers or masks, sleds or boats, etc. Stone adzes, bone, and wooden wedges were used to rough out the basic forms and once prepared for carving, men added flat surfaces, finger grips, and finer details using crooked knives fashioned from beaver or porcupine incisor teeth mounted on wooden handles. After metal became available through trade, men improvised and made crooked knife blades out of a variety of objects and kept them sharp and honed with grindstones and whetstones.

Boxes came in a variety of shapes, sizes, and forms. Some had detachable lids or lids hinged with rawhide strips or braided sinew. Sometimes hinges were secured in place with knots and small wooden pegs. Some boxes were made using dovetail joints while others were made from multiple pieces pegged together with pegs cut flush to the surface to minimize their appearance. Boxes were often encircled with grooves painted red or black, potentially a feature to represent the universe. Seal shapes were a favorite form for boxes because of the animal’s natural configuration and because it was believed men were doing the seal’s inua or spirit honor when they carved them. Box lid interiors are sometimes painted with depictions of mythological stories, paintings of European or American traders, and sexual subject matter, but the inside of the box is plain except for Sheldon Jackson’s inscription written in black ink indicating the location and year of collection. [citation 2]

The Sheldon Jackson Museum is home to over two dozen Yup’ik boxes. Many of these boxes, the February Artifact of the Month, and other Yup’ik artifacts may be seen during the museum’s operating hours Tuesday through Saturday between 10am and 4pm. The February Artifact of the Month will be on exhibit until February 28th. General admission is $6, $5 for seniors, and free for those 18 and under or members of either the Friends of the Sheldon Jackson Museum or Friends of the Alaska State Museum.