June 2019 Artifact of the Month 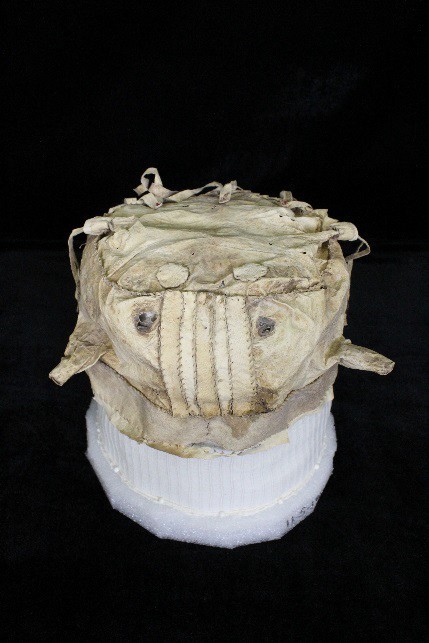 The Sheldon Jackson Museum’s June Artifact of the Month is a Yupi’k boy’s hat or uivquq (SJ-II-S-198). The hat was collected by Sheldon Jackson from the Kuskokwim region. Until recently, the museum had little information about the hat – it was evident that the hat was made from a small animal and pieced together hide that one had been covered in fur, eaten away by insects at some point in its history, that there were remnants of red cloth strips, and that it was sewn together by hand with commercial thread. Beyond these bits of information, little was known about the piece. Fortunately, during a cultural consultation at the museum in May 2019, Yup’ik artist-in-residence, Chuna McIntyre, saw the hat and provided great detail about it including what it would have looked like prior to the insect damage. Until the artist saw the hat, the museum had no knowledge of what it would have looked like prior to it being damaged. 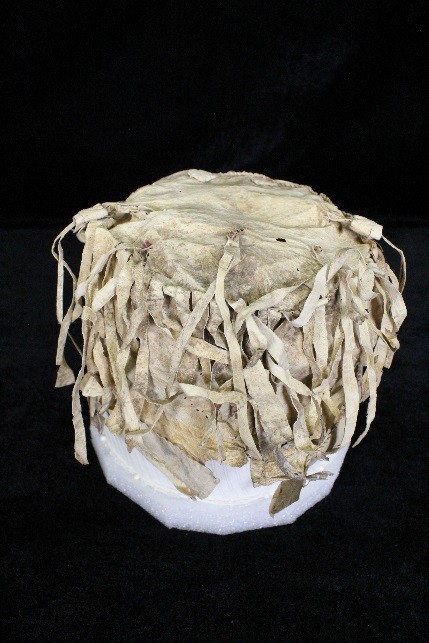 McIntyre, immediately recognized the hat for what it was upon seeing it. He himself has a similar hat that his grandmother made for him when he was a boy. He also recalled seeing young Yupiit wearing such hats in some of the “earliest photographs from home.” According to McIntyre, this is a very old style hat that would have originally be made for a boy. He would have worn the hat for special occasions and would have been able to use the hat for several years as he grew into a young man due to the open nature of the band across the back of the hat.

Despite being damaged and in imperfect condition due to a long ago insect infestation, the hat is remarkable because it allows us to see the “skeleton” of the structure. Although completely missing now, the base of the hat would have been covered with ground squirrel fur. The arms of the ground squirrel were retained on the left and right lower front sides of the hat. The tassels that flank the back would have mostly likely been covered with wolverine fur. In the back at the top of the hat in the center and left and right side there would have been three individual red yarn tassels – only three very small fragments remain. The three tassels may represent the Yup’ik trinity; the red, a color frequently employed in Yup’ik tradition, life or blood. McIntyre also pointed out that there are five strips of skin in the front – 5 for the Yup’ik representation of the digits and that the stitching is all done on the fur side and not the skin side.

The Sheldon Jackson Museum has only ten Yup’ik hats in its collection, the majority of which are bentwood. The June Artifact of the Month is the only Yup’ik hat at the museum made from hide. The June Artifact of the Month, other Yup’ik hats, and many other Yup’ik garments may be seen at the museum during operating hours – every day between 9am and 4:30pm, except some holidays. General admission is $7, $6 for seniors, and free for those 18 and under or members of either the Friends of the Sheldon Jackson Museum or Friends of the Alaska State Museum.