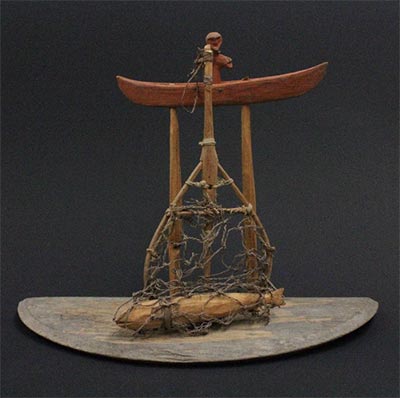 The Sheldon Jackson Museum’s September Artifact of the Month is a model showing a person fishing (SJ-II-X-72). There is little known about the model, but it is presumed to have been collected by Sheldon Jackson in the 19th century and is likely Yup’ik. The model is made of wood, root, and sinew, has multiple components, and was repaired after it was damaged 27 years ago.

In 1994, while the curator was out of town, a museum staff member opened a drawer in the collections storage room and then opened another drawer immediately above it. The drawers in cabinets inside collections storage unfortunately do not have stoppers, which means if a drawer is pulled out too far, it can come off of its tracks and fall. The staff member accidentally pulled the top drawer too far, causing it to come crashing down and damage eight of the fourteen models, primarily fish trap models, in the lower drawer. The September Artifact of the Month was one of the models broken.

In the summer of 2020, thanks to a generous grant from Museums Alaska via the Rasmuson Foundation, the Sheldon Jackson Museum was able to bring Alaska State Museum Conservator Ellen Carrlee and her intern, Buffalo State College graduate Stephanie Guidera, to Sitka to work on the damaged models. During their visit, Guidera documented, cleaned, and repaired nearly all of the broken models, including SJ-II-X-72.

The Artifact of the Month has multiple parts. It includes a wooden flat half circle base, a carved kayak on two poles, and a human figure connected to a large net with string or sinew netting. The figure and kayak are stained red, and the base has grey or faded blue pigmentation. On the bottom verso of the base is the inscription “salmon” written in graphite.

The model was significantly damaged by the 1994 incident. The components and base were broken and completely detached. The poles with the kayak attached had broken off of the base and remnants of the supports were inside the holes. The broken edges were compressed, leaving unclean, jagged edges. The lashing around the fish tail was loose. Overall, there was a layer of dirt and grime on all components. Fortunately, piecing the different elements back together was straightforward. After cleaning the object with dry techniques using a dry soft bristle brush and cosmetic sponges, a water based adhesive called Jade 403 was dabbed onto edges of the poles, and the pieces were clamped in place until dry. The figure was placed into the hole in the kayak and the pointed end of the net was inserted into the third hole in the base.

The September Artifact of the Month will be exhibited until September 30. The Sheldon Jackson Museum is home to twelve model fish traps and models of fishing activities. You can see them at the museum Tuesday-Saturday, 10 am-4 pm. General admission is $9, $8 for seniors, and free for those 18 and under or members of Friends of the Sheldon Jackson Museum or Friends of the Alaska State Museum.