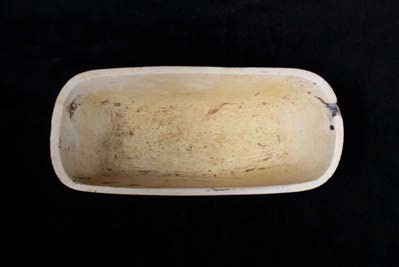 The Sheldon Jackson Museum’s December Artifact of the Month is an Inupiaq ivory dish (SJ-II-K-115). The dish was collected from Point Hope by Sheldon Jackson in 1889. For many years, the dish was catalogued as being made of bone, but closer examination shows that it is in fact mammoth or mastodon ivory.

The presence of Schreger lines indicates if something is made of bone or ivory and averages taken representing angles between the Schreger lines can indicate whether or not the ivory is from an extinct ivory-bearing animal. When determining if something is bone or ivory, one may consider the density of a piece and its coloring or texture, but these indicators are not as reliable as Schreger lines which are often described as cross-hatchings, stacked chevrons or engine turnings and present in all ivory but not bone. [1]

There are two kinds of Schreger lines in ivories that cross and form angles. The first kind and most visible to the naked eye are “outer” Schreger lines. They are located closest to the cementum, a mineralized dental tissue that covers the dentine and causes the tooth or tusk to adhere to the jaw. The second kind - “inner” Schreger lines, found around the tusk nerve or  pulp cavities, are more difficult to see. If the angles formed by the crossed lines are less than 90 degrees, in other words, acute, the ivory in question is from an extinct member of the elephantidae family – probably a mastodon or mammoth.2 If the angles of the lines are obtuse  or greater than 90 degrees and less than 180 degrees, the ivory is from either the genera Loxodonta (African elephants) or Elephas (Asiatic elephants), the only two living subgroups of their genus.

According to the U.S. Fish and Wildlife Forensics Laboratory, using a magnifying glass and any straight line such as a rule or protractor of pencil to examine cross sections of tusks with a magnifying glass, taking note of the multiple angles between the Schreger lines, and averaging them is the “simplest and most useful” test when trying to distinguish elephant from mammoth or mastodon ivory.3 In a non-museum setting, one could also use a photocopier to scan a cross section of ivory for ease of measurement and notation.

The December artifact of the month is quite rare. Although the Sheldon Jackson Museum has over 950 artifacts in the permanent collection that are completely made of or embellished with ivory, there is only one other dish completely made out of ivory in the museum’s holdings and it is identified as being a child’s toy or “model miniature” or potentially a scraper for removing fat from sealskins. 4 The majority of the nearly one thousand ivory artifacts at the museum are Inupiaq or Yupik and include artifacts such as harpoons, sled runners, pipes, combs, bird bolas, needle cases, toggles, bird spears, story knives, ice creepers, figurines, amulets, and labrets.

The December Artifact of the Month will be on exhibit until December 31st. Visitors may see these artifacts and other examples of ivory artifacts at the museum during operating hours - Tuesday through Saturday between 10 am and 4:00pm. General admission is $6, $5  for seniors, and free for those 18 and under or members of either the Friends of the Sheldon Jackson Museum or Friends of the Alaska State Museum.