April 2018 Artifact of the Month 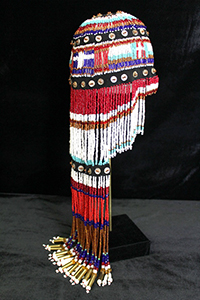 The Sheldon Jackson Museum’s April Artifact of the Month is a contemporary Alutiiq headdress made by June (Simeonoff) Pardue (SJ2015-2-1). The headdress was purchased in 2015 with generous funding from the Rasmuson Foundation Art Acquisition Fund.

The April Artifact of the Month headdress features abalone shell buttons, .38 Special empty shell casings, black common leather, glass beads, and bison bone. The crown of the headdress has black suede leather with round abalone shell buttons sewn on. Throughout the headdress, Pardue incorporated vibrantly colored beads in bronze, white, turquoise, red, and cobalt.  The beaded portion that extends along the back side of the head features bison bone beads and bullet casings, which to Pardue are symbolic of her family’s hunting practices and representative of the men in her family as “male role models and protectors of families – not only protectors from harm, but of a family’s values, emotions, and spiritual wellbeing.”

June Pardue is a contemporary Alutiiq/Sugpiaq artist originally from Kodiak. She is a well-known weaver, fish and sea mammal skin sewer, and beader with works of art in the permanent collection of the Alutiiq Museum, Baranof Museum, and the Alaska Native Heritage Center. She has taught weaving and beading at the United Nations in New York and the Smithsonian’s Institute of Master Artists.

Alaska Native peoples from the Yukon-Kuskokwim delta to southeastern Alaska made beaded headdresses. Among the Alutiiq, headdresses or nacat in the Alutiiq language, were frequently used during winter festivals, dances, and feasts. Nacat were typically made of hundreds of glass beads strung upon sinew. Both Alutiiq men and women wore beaded headdresses for ceremonial purposes, but the man’s headdress, unlike the woman’s, does not have a long tail.  Women’s headdresses would have a cap fitted to the head but the strands of beads would extend down the back, sometimes almost to the heels, with heavier, larger beads at the bottom of the long tail to provide movement when the wearer danced and swayed. Sometimes feathers dyed with blueberry or cranberry juice were added for embellishment. Together, the nacaq, worn with matching bracelets, chokers, necklaces, and belts, communicated status and symbolized a young woman’s coming of age.

The Sheldon Jackson Museum is home to only two other examples of beaded headdresses. The Artifact of the Month will be on exhibit until April 30th.  Visitors may see Pardue’s headdress and the other headdresses in the collection at the museum during operating hours - Tuesday through Saturday between 10am and noon and 1pm and 4pm. The museum is closed from noon until 1pm and holidays. In the winter, general admission is $5, $4 for seniors, and free for those 18 and under or members of either the Friends of the Sheldon Jackson Museum or Friends of the Alaska State Museum.

Crowell, Aron, and Amy F. Steffian, and Gordon L. Pullar. Looking Both Ways: Heritage and Identify of the Alutiiq People. University of Alaska, 2001