July 2018 Artifact of the Month 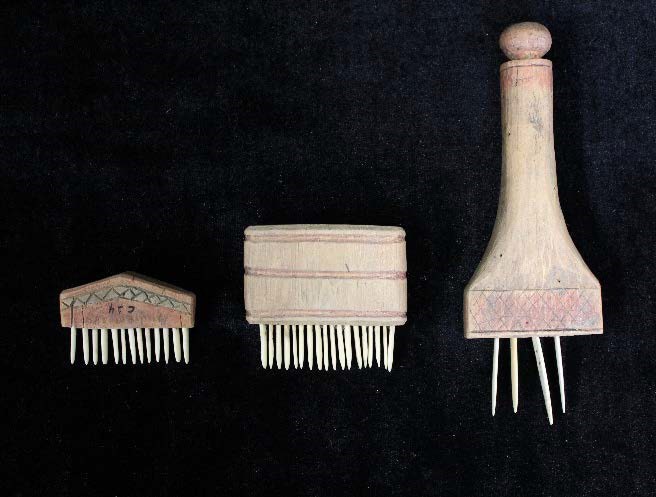 The Sheldon Jackson Museum’s July Artifact(s) of the Month are three Yup’ik combs for preparing sinew (SJ-II-B-118, SJ-II-B-126, SJ-II-H-26). All three of the combs were collected by Sheldon Jackson in the late 19th century. Two are identified as coming from Andreafski; the third is documented less specifically as being collected “from the Lower Yukon   River”   area.   All   three   artifacts feature slender bone teeth and wooden handles decorated with carving and red ochre paint. Combs like these were an important part of the traditional Yup’ik woman’s sewing kit and were indispensable for making garments.

Sinew was used by women for making thread to sew clothing everywhere from the Yukon River area and the Kuskokwim to the north Kotzebue Sound and Bering Strait islands area. Typically, the sinew use to make thread was derived from tendon of whales, caribou and other mammals. Sinew from the legs or backs of caribou was a favorite thread among Yup’ik women. A species of tough grass and fine strips of gut were also sometimes used.

To work sinew, women would beat thick strands of dried sinew, comb them, with combs like the July Artifact(s) of the Month, and shred them by hand. The combs had two to four teeth and were made out of wood, ivory, bone, or a combination of these materials. The handles varied greatly in shape and design ranging from simple and unembellished to elaborately incised and red-ochre- painted. They could be long, slender, flat, and rectangular in shape or rounded and tapered or shorter and square-like.

Once the fibers were shredded, they were plied together by braiding or twisting to the optimal size, depending on the need. If desired, the thread could be wrapped around spools or reels and stored in a sewing bag or ‘housewife’ for later use. Because sinew thread was extremely strong and rendered a seam water tight when exposed to water, it was a prized material.

Women used a variety of different kinds of stitches, each with a special purpose and name, but there were three stitches that were most commonly incorporated into Yup’ik garments – the simple folded seam using a running stitch; the couching stitch using grass, sinew, or gut along the seam; and the overstitch in which fabric was folded and stitched a running stitch followed by an additional thread to connect the seam.

The Sheldon Jackson Museum is home to more than forty different combs and many Yup’ik garments and sewing implements. The majority of combs in the collection are Yup’ik, made of ivory, bone, or wood, and were used to prepare sinew. The July Artifact(s) of the Month will be on exhibit until July 31st. Visitors may see these artifacts and other accouterments in the collection at the museum during operating hours - Tuesday through Saturday between 9am and 4:30pm. General admission is $7, $6 for seniors, and free for those 18 and under or members  of either the Friends of the Sheldon Jackson Museum or Friends of the Alaska State Museum.