May Artifact(s) of the Month 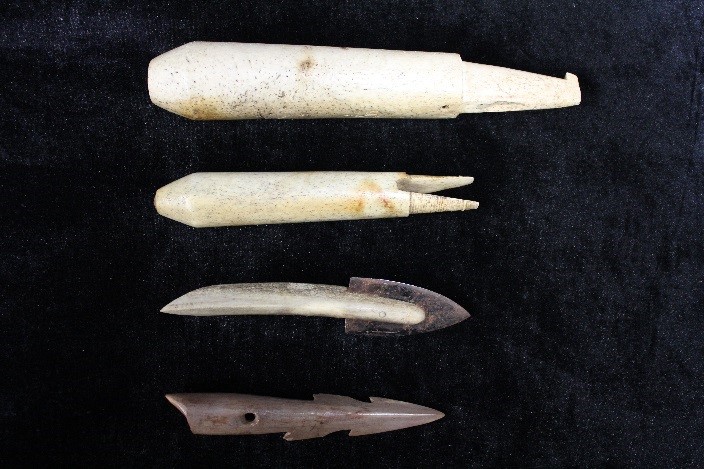 The Sheldon Jackson Museum’s May Artifact(s) of the Month is a group of harpoon implements including two Yup’ik bone harpoon foreshafts (SJ-II-S-182 and SJ-II-S183), an antler and iron blade toggle harpoon head (SJ-II-X-703), and an ivory barbed harpoon head (SJ-II-X-730). The implements are examples of one of several kinds of indispensable hunting accessories that made up a traditional coastal Yup’ik and Inupiaq hunter’s toolkit used to hunt marine animals including ringed, spotted and hair seals, walrus, and beluga whales.

The provenance for the May artifacts of the month is somewhat limited. Museum records do not indicate where either of the harpoon heads were collected from, but they were presumably collected by Sheldon Jackson in the late 19th century. The Yup’ik bone harpoon shafts were collected by two Moravian missionaries in the early 1900s – Herman and Elizabeth Holtmeier. The Holtmeiers were Moravian missionaries based in Bethel and Quinhagak between 1907 and 1917. Eighteen of the artifacts they brought back from Alaska including harpoon foreshafts, Athabascan basketry, and a Tlingit adze, among other pieces were donated to the Carver County Historical Society in Waconia, Minnesota by their descendants in 1952. In 1991, the Friends of Sheldon Jackson Museum generously purchased the materials formerly belonging to the Holtmeirs and donated it to the museum.

Harpoons are divided into two categories including those thrown from the hand - projectile weapons and those that do not leave the hand but are thrown into the animal. Both kinds of harpoons have the head only attached permanently to the line, loosely fitted to the end of the shaft, and arranged so that once the animal is struck, it is detached from the shaft. The harpoon ends enter below the skin at right angles to the line, making an escape practically impossible.

Harpoon points are traditionally made of ivory, bone, antler or iron. Different harpoon point tip shapes and depths affected points’ ability to penetrate animal’s skin and to hold fast once inside. The barbs, due to their shape, punctured quickly and would only come out of skin once pushed farther in. This held true, even if the line attached broke.  Toggling harpoon points, on the other hand, were designed to turn sideways underneath the skin. The latter kinds of point worked best for animals with thicker skin since thin skin was more apt to tear.

Harpoon foreshafts or sockets are usually made of bone or ivory and were useful in hunting because they always stayed upright in water and were visible to the user. This was especially helpful in the event that a harpooning attempt failed because the line itself, floating horizontally, would be difficult to see, while the socket would stand out. If an animal pulled a harpoon underwater and the line tightened, the socket would also stand upright and become visible to the hunter.

Most harpoon sockets are thinned at the shaft to generate a spinning motion. The thinning of the shaft stabilizes the spear so that when it is thrown, the position is maintained across a great distance and does not wobble from its orientation. An individual can produce the same impact with a football, if a spin is applied during the throw, allowing for further propulsion over a greater distance.

The Sheldon Jackson Museum is home to over one hundred and sixty harpoons and harpoon accessories. The May Artifacts of the Month will be on exhibit until May 31st.  Visitors may see these artifacts and other hunting tools in the collection at the museum during operating hours - Tuesday through Saturday between 9am and 4:30pm.   General admission is $7, $6 for seniors, and free for those 18 and under or members of either the Friends of the Sheldon Jackson Museum or Friends of the Alaska State Museum.