August 2018 Artifact of the Month 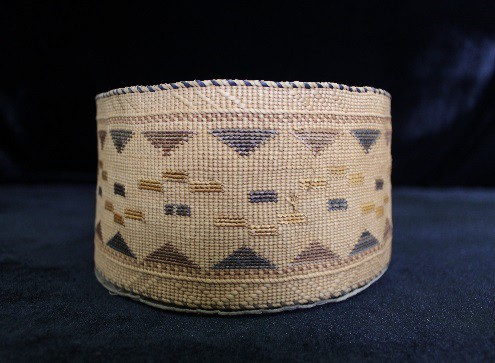 The Sheldon Jackson Museum’s August Artifact of the Month is a Tlingit, twined, spruce root basket (SJ-I-A-363). According to museum records and historic photographs, the basket was used as a collection plate in the Tlingit Presbyterian Church of Sitka and donated by the church when it closed in 1956.

The basket features several different kinds of weave including self weave, three strand twining, and strawberry weave and three different false embroidery design patterns. The three design bands include a central band with a variation of “tying” and a top and bottom design band with the half head of the salmon berry in brown and black. Near the rim and the base is a “hood of the raven” pattern in undyed spruce root. Also near the rim on one side are old repairs done with commercial thread. The base of the basket is done in solid twine base with a cardboard disc sewn to the outside exterior with commercial thread. Written on the cardboard is the following inscription: “Presbyter Sitka A .”

The First Presbyterian Church of Sitka was founded in 1884, it had forty-nine Native members, most of whom where older students of the Sitka Industrial Training School such as William Wells and Rudolph Walton, and the relatives of those students.[ i ] The original church continued to operate throughout the early and mid-twentieth century until it closed after seeing a steady decline in membership.[ ii ]

The Sheldon Jackson Museum is home to over three hundred spruce root baskets. The July Artifact of the Month will be on exhibit until July 31st. Visitors may see these artifacts and other examples of spruce root basketry in the collection at the museum during operating hours - Tuesday through Saturday between 9am and 4:30pm. General admission is $7, $6 for seniors, and free for those 18 and under or members of either the Friends of the Sheldon Jackson Museum or Friends of the Alaska State Museum.

[ii] For more on the decline of Tlingit membership in the Presbyterian Church and the turn towards Russian Orthodoxy in the late 19th and early to mid-20th century, see chapter Waashdan Kwaan Rule, 1867-85 in Memory Eternal: Tlingit Culture and Russian Orthodox Christianity through Two Centuries by Sergei Kan.