The Spirit Wraps Around You: Northern Northwest Coast Native Textiles

Organized by the Alaska State Museum (ASM), this exhibit traces the history of the sacred textiles known today as “Ravens Tail” and “Chilkat” robes. Two dozen robes will carry the story of Native weaving among the Tsimshian, Haida, and Tlingit of Alaska and British Columbia, representing both ancient and modern ceremonial robes made by Alaska Natives and First Nations weavers.

Woven from the plush white fur of mountain goats, these robes were seen by early Euroamerican visitors to the northern Northwest Coast when they contacted First Nations and Alaska Native people. Their use was reserved for sacred ceremonies, where dancers wore them to display the crests of their clans. Robes were also used as diplomatic gifts to other clans and tribes. In the 1900s, only a few weavers carried these unique traditions into the 21st century.

The exhibit is developed by ASM, working with a curatorial team of internationally renowned weavers:

“The Spirit Wraps Around You”: A New Exhibit on northern Northwest Coast Native Textiles

Abstract: The Alaska State Museum and Jilkaat Kwaan Heritage Center are collaborating with Alaska Native/First Nations co-curators on a large exhibit on the history of “Ravenstail” (Northern geometric) and Naaxein (Chilkat) weaving, to open in Juneau in May 2021. This presentation highlights the planning and design process to date, and previews some of the artifacts and subject matter to be exhibited.

The Chilkat Dye Working Group is a collaboration of weavers meeting monthly with the Alaska State Museum to guide the research of both historic and new Chilkat dye technologies. As part of the Pacific Northwest Conservation Science Consortium, the group sends both historic fiber samples and new dye reference materials to chemists at Portland State University for characterization. This synergy of art and science enhances our understanding of past innovations in their cultural context and promotes the ongoing practice of weaving through a network of nourishing relationships.

The presenters will report on the first year of research and upcoming activities including the convening of the Pacific Northwest Conservation Science Consortium that will meet in Juneau next summer for a detailed presentation and discussion of Chilkat dye analysis. 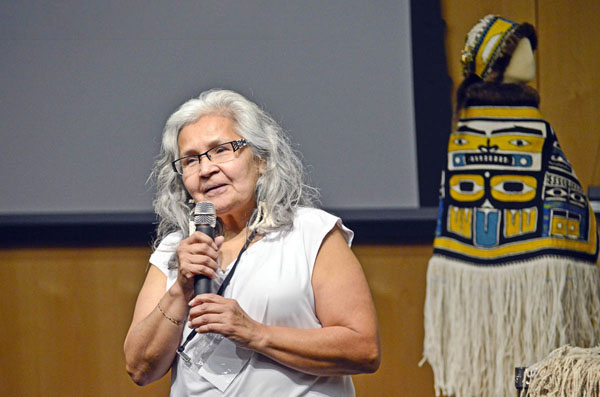 Additional funding to support this program is being solicited by the Friends of the State Library, Archives and Museums (FOSLAM). Contributions may be made through the FOSLAM website (please specify “SWAY Exhibit”).